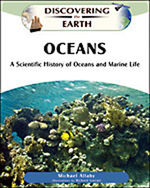 Oceans cover almost 71 percent of the Earth's surface. Travelers on land can find their way by recognizing landmarks and navigating with the help of maps, but there are no landmarks at sea and mariners must find other signposts to guide them. Many centuries ago, navigators learned to steer by the sun and stars and by compasses that align themselves with the Earth's magnetic field. Equipped with simple instruments, surveyors defined the boundaries of the ocean while scientists mapped the ocean currents.

Oceans explores some of the mapmakers, scientists, and adventurers who dedicated their lives to improving our understanding of the oceans. This new resource begins with the long process of mapping the oceans and the many problems that had to be solved before this could be achieved satisfactorily. This full-color book details some of the greatest surveyors and mapmakers, including Captain James Cook and Robert FitzRoy, as well as some of the explorations that made a huge impact on ocean research. Ocean basins are also examined in this comprehensive resource.