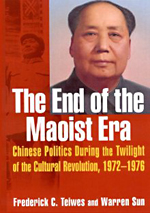 This book launches an ambitious reexamination of the elite politics behind one of the most remarkable transformations in the late twentieth century. As the first part of a new interpretation of the evolution of Chinese politics during the years 1972-82, it provides a detailed study of the end of the Maoist era, demonstrating Mao's continuing dominance even as his ability to control events ebbed away.The tensions within the 'gang of four', the different treatment of Zhou Enlai and Deng Xiaoping, and the largely unexamined role of younger radicals are analyzed to reveal a view of the dynamic of elite politics that is at odds with accepted scholarship. The authors draw upon newly available documentary sources and extensive interviews with Chinese participants and historians to develop their challenging interpretation of one of the most poorly understood periods in the history of the People's Republic of China.

Front Cover.
Half Title Page.
Title Page.
Copyright Page.
Dedication.
Contents.
Tables.
Abbreviations.
Preface.
Introduction.
1: Coming to Terms with Lin Biao: "Ultra-Left" and "Ultra-Right" on the Road to the Tenth Party Congress, 1972-73.
2: "The Second Cultural Revolution," Fall 1973-Summer 1974.
3: Toward the Fourth National People's Congress, August 1974-January 1975.
4: Mao, Deng and the Politics of Consolidation: From the Fourth NPC to Summer 1975.
5: Deng's Period In Charge: Comprehensive Consolidation, July-October 1975.
6: The Unfolding of a New Leadership Equation: The Turn against Deng and the Ascent of Hua, November 1975-March 1976.
7: The Tiananmen Incident and Mao's Last Days, April-September 1976.
8: The Purge of the "Gang of Four," September-October 1976.
Conclusion.
Bibliography.
Index.
About the Authors.