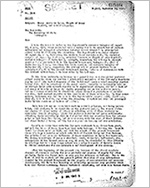 The goals of the U.S.- led SAFEHAVEN program (as it came to be known because its goal was to deny any “safe haven” for Nazi looted assets) were to block Germany from transferring assets to Switzerland and the other neutral nations; to ensure that German wealth would be available for the reconstruction of Europe and for the payment of reparations to the Allies; to enable properties looted by the Nazis in occupied Europe to be returned to their owners; to prevent the escape of key German personnel to neutral havens; and above all, to deny Germany the capacity to start another war. There was general agreement within the U.S. government and with its Allies regarding these overall objectives. But internal differences among U.S. agencies meant the President never received consistent advice about how strenuously to push these SAFEHAVEN measures and how far to use wartime economic power to force Switzerland and the other neutrals to adhere to the program. Moreover, splits between the Allies exacerbated the problem.

SAFEHAVEN was the code name of a project of the Foreign Economic Administration, in cooperation with the State Department and the military services, to block the flow of German capital across neutral boundaries and to identify and observe all German overseas investments. To coordinate research and intelligence sharing regarding SAFEHAVEN-related topics, the War Crimes Branch received SAFEHAVEN reports from various agencies of the U.S. government in addition to SAFEHAVEN-related military attaché reports regarding the clandestine transfer of German assets outside Germany that could be used to rebuild the German war machine or the Nazi party after the war, as well as art looting and other acts that elicited the interest of Allied intelligence agencies during the war. Another aspect of the SAFEHAVEN project was the restoration of looted art treasures to their rightful owners.