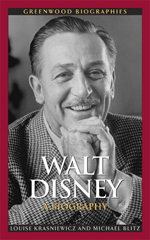 Walter Elias Disney lived for only 65 years. In that time, he introduced us to beloved icons like Mickey Mouse and Donald Duck, created a Magic Kingdom, and reintroduced fairy tales into the lives of America's children. Born at the beginning of the 20th century, Disney pointed American culture towards the 21st with his promotion of science, technology, and innovation.