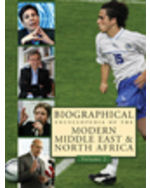 A window on the people and culture of the Middle East, the Biographical Encyclopedia of the Modern Middle East & North Africa illuminates the lives of the most influential and controversial figures in the region who came to prominence during the twentieth and twenty-first centuries. It includes more than 300 alphabetically arranged profiles of contemporary leaders who belong to various political, ethnic, and religious groups, as well as notable individuals associated with business, law, science, social issues, sports, entertainment, literature, and the fine and performing arts not well covered in other encyclopedias. Features include sidebars, a timeline, maps and portraits, along with subject, nationality and ethnicity indexes.

"this two-volume work collects biographical profiles of some 300 prominent individuals of the Modern Middle East and North Africa, from Mauritania in the west to Afghanistan in the east. A remarkably successful effort has been made to remain as non-polemical and non-partisan as possible, although scholarly assessment of the individuals' legacies is not neglected." --Reference & Research Book News, May 2008

"The structured approach provides consistency that is often lacking in multi-author works. Because of the popular interest in the Mideast and North Africa, large public libraries and smaller college or university libraries might want this set." --Library Journal, March 15, 2008