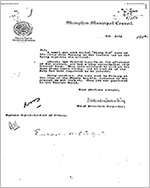 These files represent a large portion of the archives of the British-run municipal police force based in Shanghai's former International Settlement. This self-governing area was administered not by the Chinese but by the international group of merchants and bankers who paid the taxes and controlled the municipal council. The Special Branch of the Shanghai Municipal Police was charged with providing an orderly environment for Shanghai's foreign trade and commerce. Carrying out its duties required the timely gathering of information on areas of potential instability that might threaten Shanghai's economic development and political calm.

This branch's prime responsibilities were collecting intelligence on political demonstrations, strikes, labor and social unrest, foreign and domestic subversive activities, and areas of dispute between the International Settlement and the Chinese government. The time period covered by these files extends from 1894 to 1945. The most extensive coverage is provided by the Special Branch dossier files, which date from 1929-1945. Many files are organized around a particular topic and contain different kinds of source material. For example, a report on a major strike includes memoranda regarding that strike, plus supporting reports, handbills, translations of Chinese press coverage and clippings from the English-language press.