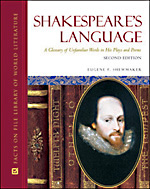 Rife with arcane references, unfamiliar expressions, and words of his own invention, Shakespeare's texts can intimidate even the most learned reader. Shakespeare's Language, Second Edition is a comprehensive and straightforward guide to the ornate and sometimes bewildering language that may be unfamiliar to today's readers of Shakespeare's plays and poetry.

This revised and updated edition contains approximately 17,000 definitions - more than 2,000 of which are new - from the adjective "acerb" in Othello to the verb "zwaggered" in King Lear. It also features an all-new chapter, "Introduction to Shakespeare and His Language," which provides essential background on Shakespeare's life and works, as well as an in-depth discussion of how modern readers can approach his works in order to best understand and enjoy them.