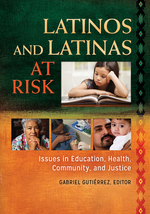 The Latino/a presence in this country predates the United States itself, yet this group is often marginalized in the American culture. Many noted experts explore the ideology behind this prejudicial attitude, examining how America views Latinos/as, how Latinos/as view themselves, and what the future of America will look like as this group progresses toward equitable treatment. Through the exploration process, the book reveals the complexity and diversity of this community, tracing the historical trajectories of those whose diverse points of origin could be from almost anywhere, including the Americas, Europe, or other places. Written with contemporary issues at the forefront, this timely collection looks at the resolve of the Latino people and considers their histories, contributions, concerns, and accomplishments. Pointed essays address disparate quality-of-life issues in education, health, and economic stability while depicting individual and group efforts in overcoming barriers to mainstream American society. Each chapter discusses key challenge areas for the Latino American population in everyday life. An engaging "Further Investigations" feature poses questions about most of the essays, leading to critical thinking about the most important topics affecting Latino/as today.