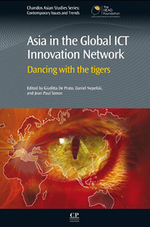 Production and innovation activities are being re-distributed across the world. The BRICS countries (Brazil, Russia, India and China) are proving the major engine of global growth, being less impacted by the financial crisis than developed economies or able to recover more quickly. Asia in the Global ICT Innovation Network takes a close look at the information and communication technologies (ICTs) landscape, not only in two BRICS countries, India and China, but also in South Korea and Taiwan. The book documents the size of the ICT sector for each of the selected countries, and assesses their R&D expenditure and its place in the international innovation network. The selected countries play a major role in shifting patterns of international trade and global value chains. The countries offer different historical profiles, with reforms dating back from the nineties for “Chindia and earlier policies for the “dragons, with later reforms focusing on IT. The book accounts for their specificity, and emphasises the fact that the four countries have achieved impressive results in terms of economic growth. The ICT sector was a major contributor to this growth and led a pioneering role for other sectors.This title consists of three parts: ICT in emerging economies, covering China and India; the return of the dragons, covering South Korea and Taiwan; and Network knowledge and trade, covering regional networks of R&D centres, India as an S&T cooperation partner, Asian countries in the global production network, and Asia in the process of internationalisation of ICT and R&D.

Front Cover.
Half Title Page.
Other Frontmatter.
Title Page.
Copyright Page.
Contents.
List of Figures.
List of Tables.
List of Abbreviations.
Glossary.
Acknowledgments.
Preface.
About the Authors.
About the Contributors.
1: Introduction.
2: IT in Emerging Economies: Chindia.
3: Information and Communications Technology Sector in India.
4: China.
5: The Return of the Dragons.
6: South Korea.
7: Taiwan.
8: Networks of ICT Technology and Innovation.
9: Internationalization of ICT R&D: a Comparative Analysis of Asia, the EU, Japan, the U.S., and the RoW.
10: Asia in the Global ICT R&d Network.
11: Assessing India as a Technology and Innovation Cooperation Partner.
12: Conclusion.
References.
Index.