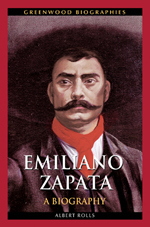 Emiliano Zapata is regarded as among the most important figures of the Mexican Revolution. This book provides more than just a biography of a great leader; it enables readers to understand who Zapata was and the interests and ideologies he supported, emphasizing his ideals and distinguishing him from those who have used his name for their own purposes.The biography is organized chronologically, detailing Zapata's youth and early adulthood in the years preceding the Mexican Revolution; his role in getting his home state involved in the Revolution; and his ascent to power in Morelos' revolutionary movement. The author elucidates Zapata's continual struggle to bring meaningful change to the lives of Mexico's poorest people, how his commitment to revolutionary reform came to define his existence, and how his ideals led to his own violent death as they had to the deaths of so many of his adversaries.

Front Cover.
Half Title Page.
Recent Titles in Greenwood Biographies.
Title Page.
Copyright Page.
Contents.
Series Foreword.
Preface.
Timeline: Events in the Life of Emiliano Zapata.
1: A Child of Anenecuilco, Morelos.
2: Zapata's Early Political Education.
3: Bringing the Revolution to Morelos.
4: The Revolution Continues and the Plan de Ayala.
5: In the Face of Brutality and Gentleness.
6: The Rise and Fall of Huerta.
7: The Revolution Enters A New Phase.
8: Starting Over Again.
9: The Battle for Morelos.
10: Beyond the 1917 Constitution.
11: The Final Betrayal.
Appendix.
Selected Bibliography.
Index.
About the Author.