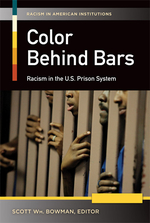 Low-income African Americans, Latin Americans, and American Indians bear the statistical brunt of policing, death penalty verdicts, and sentencing disparities in the United States. Why does this long-standing inequity exist in a country where schoolchildren are taught to expect "justice for all"? The original essays in this two-volume set not only examine the deep-rooted issues and lay out theories as to why racism remains a problem in our prison system, but they also provide potential solutions to the problem. The work gives a broad, multicultural overview of the history of overrepresentation of ethnic minorities in our prison system, examining white/black disparities as well as racism and issues of ethnic-based discrimination concerning other ethnic minorities. This up-to-date resource is ideally suited for undergraduate students who are enrolled in criminal justice or racial/ethnic studies classes and general readers interested in the U.S. criminal justice system.

Front Cover.
Half Title Page.
Other Frontmatter.
Title Page.
Copyright Page.
Contents.
Series Foreword.
1: How Did We Get Here?: Historical Considerations of Minority Imprisonment.
2: Jim Crow: A Total Institution—Navigating a Gateless Prison System.
3: Hegemony and Collective Memories: Japanese-American Relocation and Imprisonment on American Indian “Land”.
4: Residential Segregation and the Construction of an Incarcerated Underclass: Historical Considerations.
5: The Marginalization and Criminalization of the Black Male Image in Postmodern America.
6: Race/Ethnicity, Historical Labor Punishments, and the Evolution of Private Prisons.
7: Court-Involved Latina Girls: Shackled, Silenced, and Invisible.
8: Race, Rape, and Disparity: A Historical Perspective.
9: The Incarcerative Mentality of Eurocentrism: Prisoner Identification and Jailing the Imperfect Body.
10: Historical Perspectives on Race and the War on Drugs and the Prolonged Effects of Racially Biased Laws and Policies.
11: The Juvenile Justice System: An Analysis of Discretion and Minority Overrepresentation.
12: Asian Americans, Deviance, Crime, and the Model Minority Myth.
13: We Shall Not Forget This: Native Americans and Colonial Racism in American Prisons.
14: The Mass Incarceration of Latinos in the United States: Looking Ahead to the Year 2050.
15: Impact of Mass Incarceration on African-American Women.
Title Page.
1: What Keeps Us Here?: Policies and Practices That Shape Minority Overrepresentation.
2: Ethno-Racial Factors in the U.S. Prison System: Forensic Psychological Realities of Correctional Officers.
3: Counseling, Treatment, and Culture in Prison: One Size Fits All?.
4: Prison Privatization: The Political Economy of Race.
5: The Zero Point of Mass Incarceration: Mandatory Minimums and the Enfleshment of Determinate Sentencing.
6: Race and the Three Strikes Law.
7: How Prisons Became Dystopias of Color and Poverty: Prison Abolition Lessons from the War on Drugs.
8: Return to the Rez: Native American Parolees' Transitions to Community Life.
9: Race and the Death Penalty in America.
10: Reentry, Revocation, and Recidivism for Racial/Ethnic Minorities.
11: Racial/Ethnic Imprisonment and the Larger Community Effects.
12: Muslims, the War on Terror, and Prisons.
13: The Ghosts of Slavery: Trying Juveniles as Adults.
14: Privilege and Prison: A Reconstruction of the Race/Crime Paradigm.
Bibliography.
About the Editor and Contributors.
Index.