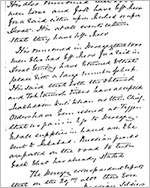 Alexander III condemned the influence of Western culture, ideas, and liberalist reforms supported by his father. He believed that Russia had lost its domineering role in Eastern Europe due to Western liberalism. Alexander's political ideal was a nation containing only one nationality, language, religion and form of administration; and he did his utmost to prepare for the realization of this ideal by imposing the Russian language and Russian schools on his German, Polish and other non-Russian subjects, by fostering Eastern Orthodoxy at the expense of other religions, by persecuting Jews and by destroying the remnants of German, Polish and Swedish institutions in the outlying provinces.

The British Foreign Office Records of General Correspondence for Russia is the basic collection of documents for studying Anglo-Russian relations during this period of change in domestic and international affairs. This collection consists of the bound volumes of correspondence for the 1883 to1886 period.

The office of principal secretary of state for foreign affairs and a separate Foreign Office came into existence in 1782. Throughout the 19th century, the Foreign Office establishment gradually increased and regular divisions of labor and procedures were instituted. Dispatches and drafts relating to important matters were copied and circulated to the prime minister and the sovereign. Other papers of less importance were circulated to the cabinet. The Foreign Office was organized along departmental lines, with the departments grouped into two categories: political and non-political.