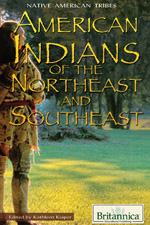 Sharing a number of traditions and practices, the Native American tribes of the Northeast and Southeast regions of the United States are sometimes considered as a single culture area known as the Eastern Woodlands. Despite their cultural similarities, however, each region, and each tribe within each region, has its own customs and histories that distinguish one from another. This engaging volume examines the history of the indigenous peoples, including their first encounters with European colonizers and conquerors, as well as the various native languages, rituals, kinship, and characteristics that have survived despite Western influence and assimilation practices.