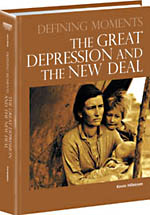 The Great Depression and the New Deal, 1st Edition

The Great Depression and the New Deal provides users with a detailed and authoritative overview of this event, as well as the principal figures involved in this pivotal episode in U.S. history. The preparation and arrangement of this volume--and all other books in the Defining Moments series--reflect an emphasis on providing a thorough and objective account of events that shaped our nation, presented in an easy-to-use reference work.

The Great Depression and the New Deal is divided into three primary sections. The first, the Narrative Overview, provides a detailed, factual account of the Stock Market Crash of 1929 and the Great Depression, as well as President Franklin D. Roosevelt’s ambitious program of New Deal reforms. It explains the economic problems that plunged the nation into the Depression, as well as the impact that this grim era had on millions of American families. This section also explores the ways in which Roosevelt’s New Dealers succeeded--and failed--in their efforts to get the country back on the road to prosperity.

The second section, Biographies, provides valuable biographical background on leading figures involved in this era, including President Roosevelt and his much-admired First Lady, Eleanor; New Deal official Frances Perkins, who directed Roosevelt’s Department of Labor; and Henry Wallace, who became the New Deal's most spirited champion. Each biography concludes with a list of sources for further information on the profiled individual.

The third section, Primary Sources, collects essential and illuminating documents from the Great Depression era. This collection includes several of Franklin D. Roosevelt’s most famous addresses, excerpts from John Steinbeck’s The Grapes of Wrath, the Dust Bowl songs of Woody Guthrie, and childhood reminiscences of the darkest days of the Depression.