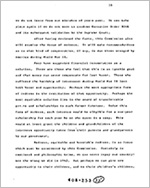 Personal Justice Denied: Public Hearings of the Commission on Wartime Relocation and Internment, 1981

On February 19, 1942, President Franklin D. Roosevelt signed Executive Order 9066, which gave to the Secretary of War and the military commanders the power to exclude any and all persons, citizens, and aliens from designated areas to provide security against sabotage, espionage, and fifth column activity. Shortly thereafter, all American citizens of Japanese descent and Japanese immigrants were prohibited from living, working, or traveling on the West Coast of the United States. These American citizens and their alien parents were removed by the Army first to "assembly centers" and then to "relocation centers" -- bleak barrack camps mostly in desolate areas of the West. The camps were surrounded by barbed wire and guarded by military police. Departure was permitted only after a loyalty review on terms set, in consultation with the military, by the War Relocation Authority, the civilian agency that ran the camps. Many of those removed from the West Coast were eventually allowed to leave the camps to join the Army, go to college outside the West Coast, or go to whatever private employment was available. For a larger number, however, the war years were spent behind barbed wire. For those who were released, the prohibition against returning to their homes and occupations on the West Coast was not lifted until December 1944.

This publication consists of the testimony and documents from more than 750 witnesses: Japanese Americans and Aleuts who had lived through the events of WWII, former government officials who ran the internment program, public figures, internees, organizations such as the Japanese American Citizens League, interested citizens, historians, and other professionals who had studied the subjects of the Commission's inquiry. Many of the transcripts are personal stories of experiences of evacuees. Documents include publications, reports, press releases, photographs, and newspaper clippings related to the hearings.