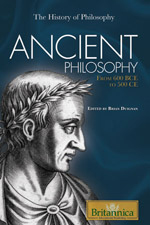 Supplanting mythical explanations with those based on observation, early Greeks and some of their contemporaries sought to comprehend worldly phenomena in terms of more universal truths. This book introduces readers to the figures instrumental in implementing this refined way of thinking, including Socrates, Plato, and Aristotle. It also examines the effect of these thinkers on the major religions of the time, namely, Judaism and Christianity.

Front Cover.
Half Title Page.
Title Page.
Copyright Page.
Contents.
Introduction.
1: Early Greek Philosophy: The Pre-Socratics.
2: Cosmology, Metaphysics, and Epistemology.
3: The Early Cosmologists.
4: Being and Becoming.
5: Appearance and Reality.
6: Pythagoras and Pythagoreanism.
7: Skepticism and Relativism: The Sophists.
8: The Philosophy of Socrates.
9: His Life and Personality.
10: Why Was Socrates Hated?.
11: The Impression Created by Aristophanes.
12: The Human Resistance to Self-Reflection.
13: Socrates' Criticism of Democracy.
14: The Legacy of Socrates.
15: The Philosophy of Plato.
16: His Life.
17: Dialogue Form.
18: Happiness and Virtue.
19: The Theory of Forms.
20: Linguistic and Philosophical Background.
21: Forms as Perfect Exemplars.
22: Forms as Genera and Species.
23: The Dialogues of Plato.
24: Early Dialogues.
25: Middle Dialogues.
26: Late Dialogues.
27: The Philosophy of Aristotle.
28: His Life.
29: The Academy.
30: Travels.
31: The Lyceum.
32: His Philosophy.
33: Logic.
34: Physics and Metaphysics.
35: Philosophy of Mind.
36: Ethics.
37: Political Theory.
38: Rhetoric and Poetics.
39: The Legacy of Aristotle.
40: Hellenistic and Roman Philosophy.
41: Stoicism.
42: The Nature and Scope of Stoicism.
43: Early Greek Stoicism.
44: Later Roman Stoicism.
45: Epicureanism.
46: The Nature of Epicureanism.
47: The Works and Doctrine of Epicurus.
48: Skepticism.
49: Pythagoreanism and Neo-Pythagoreanism.
50: Neoplatonism.
51: Plotinus and His Philosophy.
52: The Later Neoplatonists.
53: Jewish and Christian Philosophy in the Ancient World.
54: Philo Judaeus.
55: Life and Background.
56: Works.
57: The Originality of His Thought.
58: Saint Ambrose.
59: Early Career.
60: Ecclesiastical Administrative Accomplishments.
61: Literary and Musical Accomplishments.
62: Evaluations and Interpretations.
63: Saint Augustine.
64: Life.
65: Chief Works.
66: Augustine's Spirit and Achievement.
67: Anicius Manlius Severinus Boethius.
Conclusion.
Glossary.
Bibliography.
Index.