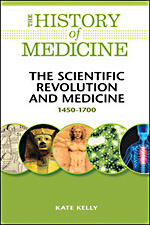 The Middle Ages marked a time when religion and superstition dominated all thinking and stalled the pursuit of new ideas. The questioning of everything from religious doctrines to styles of government to the understanding of the way the world works led to many significant developments, most notably the scientific method. This method was a process for experimentation that was used to explore observations and answer questions. This new methodology led to great developments in the fields of astronomy, physics, biology, and anatomy.

The Scientific Revolution and Medicine examines the scientific revolution and how it has affected future developments in medicine. This book is a vital addition to literature on the Scientific Revolution because it puts the medical discoveries of the period into perspective, providing readers with a better understanding of the accomplishments of the time. While physicians of this era did not yet know the cause of disease, they began to make advances that would be vital for medical improvements still to come. Featuring a chronology, a glossary, and an array of historical and current sources for further research, this volume is especially useful for readers in need of additional information on specific terms, topics, and developments in medical science.