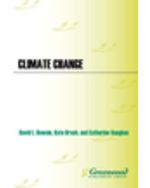 Global climate change is on the public mind now more than ever, even though the first paper on the effects of carbon dioxide was published over 100 years ago, in 1896. The Intergovernmental Panel on Climate Change (IPCC) recently stated that climate warming is unequivocal and can be attributed to human activities, yet many politicians and citizens do not agree. What has been, and should be, done to address global climate issues?

Climate Change: A Reference Handbook offers readers a way to separate science from politics on this crucial and often contentious issue. It provides a comprehensive introduction to the science and public policy of climate change, including discussion of historical developments, today's key concepts, and the future of climate science and policy.

Climate Change begins by explaining the science behind global climate change, including the growing consensus that human activity is a major contributing factor. It then takes an objective look at the key conflicts in climate science and policy, describes those that have been resolved, and offers a balanced review of proposals for those that have not. A separate chapter focuses on the scientific, economic and political aspects of climate change as they are playing out specifically in the United States.