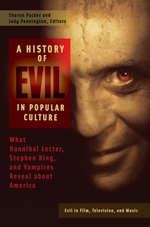 A History of Evil in Popular Culture: What Hannibal Lecter, Stephen King, and Vampires Reveal about America, 1st Edition

Evil has been with us since the Garden of Eden, when Eve unleashed evil by biting the apple. Outside of theology, evil remains a highly relevant concept in contemporary times: evil villains in films and literature make these stories entertaining; our criminal justice system decides the fate of convicted criminals based on the determination of their status as "evil" or "insane." This book examines the many manifestations of "evil" in modern media, making it clear how this idea pervades nearly all aspects of life and helping us to reconsider some of the notions about evil that pop culture perpetuates and promotes. Covering screen media such as film, television, and video games; print media that include novels and poetry; visual media like art and comics; music; and political polemics, the essays in this book address an eclectic range of topics. The diverse authors include Americans who left the United States during the Vietnam War era, conservative Christian political pundits, rock musicians, classical linguists, Disney fans, scholars of American slavery, and experts on Holocaust literature and films. From portrayals of evil in the television shows The Wire and 24 to the violent lyrics of the rap duo Insane Clown Posse to the storylines of the Lord of the Rings and Harry Potter books, readers will find themselves rethinking what evil is-and how they came to hold their beliefs.

Front Cover.
Half Title Page.
Title Page.
Copyright Page.
Contents.
Introduction.
1: Film and Television.
2: Mississippi (and Bensonhurst) Burning: Racist Enjoyment, Fantasies of Containment, and the Real of Social Evil.
3: From Conrad Veidt to Christoph Waltz: The Nazi in American Film.
4: The Usual Suspects: The Devil Is a Storyteller, Not a Liar.
5: Know Your Killer: Changing Portrayals of Psychosis in Horror Films.
6: Empire and Evil: Star Wars, the Romans, and the New Mythology.
7: Potter versus Voldemort: Examining Evil, Power, and Affective Responses in the Harry Potter Film Series.
8: K.O.'ing Communism: Rocky and Rambo Fight the Cold War.
9: The Birth of the Black Rapist: The “Brutal Black Buck” in American Culture.
10: Two Eyes for One: The Vigilante in American Cinema.
11: Suckers for Blood: Vampire Pop Culture.
12: “All I Saw Was Evil”: Supernatural's Reactionary Road Trip.
13: Corporate Greed as a Representation of Evil in Pop Culture.
14: As Deadly as a Hit Man: The Hit Man and Evil in American Film.
15: Evil in the Films of Martin Scorsese.
16: The Monstrous Feminine: Reimagining Aliens in American Horror Films.
17: The Sliding Scale of Evil: Television Vampires in a Post-Bush World.
18: Nazi Zombies: The Horrors of War, Revived.
19: Occupied America(ns): Contemporary Trends in American Possession-Horror Films.
20: Breaking Bad: Breaking Down the Categories of Morality through Grid and Group.
21: Nightmare on Wall Street: Zombie Bankers and the New Contagion.
22: The Evil of Hunger and Survival in The Road.
23: “Freddy's Shadow”: Nostalgia, Evil, and the 1980s in A Nightmare on Elm Street.
24: “We're Them and They're Us”: Zombies as a Reflection of American Culture.
25: Bad Day at Black Rock and the Overcoming of Evil.
26: Viewing Evil through a Hollywood Lens, via Steven Spielberg's Schindler's List.
27: Will and Programming: Good and Evil in Terminators and Humanity.
28: Music and Lyrics.
29: The Dark Side of the Tune: Relocating the Crossroads in American Popular Music, 1930–1970.
30: Slayer and Metallica: Two Portraits of Evil.
31: “Highway to Hell”: Laws, Lawsuits, and Moral Panic over Heavy Metal Music.
32: “Strange Fruit” Sounds: The Legacy of Lynching in America.
33: The Devil: Hip-Hop's Original Hater.
About the Contributors.
Volume 1 Index.
Title Page.
Contents.
Introduction.
1: Novels, Poems, and Short Stories.
2: Gender, Goth, and Gore: Evil in the Horror Fiction of Poppy Z. Brite.
3: Inviting the Devil to “Cross Over” the Threshold: The Short Stories of Joyce Carol Oates, Iteration, and American Fears of Precariousness in the 21st Century.
4: Stephen King: Evil in Its Many Forms—Children Beware!.
5: Evil Monsters in Horror Fiction: An Evolutionary Perspective on Form and Function.
6: The Evils of Slavery and Their Legacy in American Literature.
7: Hannibal: His History and His Heirs.
8: The Man of the Crowd: Following Poe and Finding Evil in Popular Culture.
9: “Like Rats behind the Wainscoting”: Evil in American Hardboiled Fiction.
10: “Is It Safe?”: Evil and the Escaped Nazi War Criminal in American Novels in the 1970s.
11: What American Vampire Literature Teaches Us about Dangerous Consumption.
12: Comics, Animation, Video Games, Murderabilia, and Art.
13: “The Sanitation Man”: Erasing Evil in Walt Disney.
14: From Pogo to Pennywise: The Rise of the Evil Clown in American Pop Culture since 1978.
15: Marks of Cain: Physical Manifestations of Human Evil in Virtual Narratives.
16: Pictures of Evil: Francis Bacon's Painting in American Popular Culture.
17: Disney's Sorcerers, Magicians, and Wicked Witches and Why Disney's Approach to Evil Spoke to America.
18: Bad Psychiatrists in Batman: A Mirror into a Murderer.