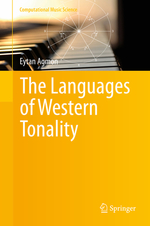 Tonal music, from a historical perspective, is far from homogenous; yet an enduring feature is a background 'diatonic' system of exactly seven notes orderable cyclically by fifth. What is the source of the durability of the diatonic system, the octave of which is representable in terms of two particular integers, namely 12 and 7? And how is this durability consistent with the equally remarkable variety of musical styles — or languages — that the history of Western tonal music has taught us exist? This book is an attempt to answer these questions. Using mathematical tools to describe and explain the Western musical system as a highly sophisticated communication system, this theoretical, historical, and cognitive study is unprecedented in scope and depth. The author engages in intense dialogue with 1000 years of music-theoretical thinking, offering answers to some of the most enduring questions concerning Western tonality. The book is divided into two main parts, both governed by the communicative premise. Part I studies proto-tonality, the background system of notes prior to the selection of a privileged note known as 'final.' After some preliminaries that concern consonance and chromaticism, Part II begins with the notion 'mode.' A mode is 'dyadic' or 'triadic,' depending on its 'nucleus.' Further, a 'key' is a special type of 'semi-key' which is a special type of mode. Different combinations of these categories account for tonal variety. Ninth-century music, for example, is a tonal language of dyadic modes, while seventeenth-century music is a language of triadic semi-keys.