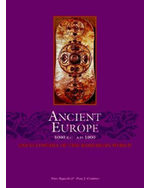 This detailed encyclopedia is the first to explore the many peoples of early European civilization. Viewed as "barbarian" through the lens of ancient Greece and Rome, these civilizations were responsible for such accomplishments as the rise of farming in the Neolithic era and the building of Stonehenge. Coverage extends from prehistoric origins through the early Middle Ages (8000 B.C. to A.D. 1000) when tribal movements helped define the end of ancient culture and the rise of the modern European world. Arrange topically and chronologically Ancient Europe, 8000 B.C. to A.D. 1000 features include 200 illustrations (including the black & white images, color images, and line drawings); 70 maps; a chronology; index; two eight-page color inserts; cartographic endpapers; glossary of key archaeological terms and more.

"This encyclopedia opens up the worlds beyond the splendors of the Mediterranean and shows that there was indeed civilization and culture in the hinterlands of Europe before the modern period..accompanied by sharp, well-reproduced, black-and-white illustrations and photographs. Each volume also includes a set of good color illustrations as well as maps and timelines..this set is a joy to read and a worthwhile purchase, especially for academic libraries and larger public libraries."--ARBA (2004)

"This insightful guide is highly recommended for academic libraries."--Lawrence Looks at Books (July 2004)

"Once upon a time students were told that history consisted of the recorded events of the past. By this definition, history was often interpreted as requiring written records, and thus its limits in tome varied from place to place. This new archaeological encyclopedia demonstrates just how old-fashioned such notions are. The focus is not the classical and medieval civilizations that recorded their history on clay, stone, papyrus and vellum, but the peoples who lived on the fringes of such societies, well beyond the reach of imperial swords and the bureaucrat's pen and stylus. Mesolithic farmers, megalith builders, Etruscans, Celts, Huns, Picts, Vikings and a host of other barbaric peoples for whom our chief sources of information are simply the material remains they left behind are introduced to the reader. Following an introduction to various approaches to archaeology, the arrangement is roughly chronological, with sections focusing on the transition to agriculture, the introduction of metallurgy, the European Iron Age and the period of great migrations. Many of the 212 scholarly articles discuss such topics as early crops, the first domestication of the horse, the building of trackways through swamps, the first boats, the beginnings of trade and markets, and the origins of iron production. Other entries feature particular sites or finds like the Ice Man, Varna, Stonehenge and Sutton Hoo. A glossary, timelines, more than 300 maps and illustrations and selective bibliographies in each entry aid the beginning researcher. This insightful guide is highly recommended for academic libraries."--Lawrence Looks at Books, (July 2004)

A superbly written work that covers a history all but ignored in conventional historical surveys, this set features 212 essays written for a general readership by 131 contributors... Any public and academic library that has a clientele interested in European archeology or the featured historical period covered will find this a valuable purchase."--Booklist (April 2004)

"Scribners continues its series of encyclopedias on major historical periods (Dictionary of the Middle Ages; Encyclopedia of the Renaissance; Europe 1450-1799) with this fine brace of volumes, intended to cover a staggering nine millennia of European history... Authors describe and interpret evidence of agriculture, burial practices, rituals and structures. The scope of the book allows readers to study areas or tribes, and compare them with other areas or peoples, thereby gaining a sense of the distinctiveness and the commonalities of the erstwhile vague prehistoric Europeans. Editors Bogucki (Priceton) and Crabtree (New York University) have gathered essays from and international cast of recognized authorities, whose breadth of expertise provides a reliable sense of the encyclopedia¿s scope and reliability. Articles are signed, well illustrated (although more maps would have been very helpful), and include excellent bibliographies and cross-references. Recommended for academic libraries supporting majors in historical studies." --Catholic Library World, (June 2004)