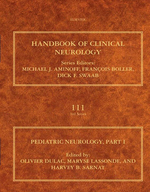 Children are not miniature adults or immature humans. They express abilities that optimize environmental adaptation and new acquisitions. Diseases in children encompass the adult specialties. Neurology is a particularly large area, ranging from the brain to striated muscle. The human nervous system is sensitive to prenatal aggression and particularly immature at birth. Development may be affected by age-dependent disorders. Even diseases more often encountered in adults may express differently in developing nervous systems. The course of chronic neurological diseases beginning before adolescence is distinct from adult pathology. A growing area for adult neurologists is the care of children with neurological diseases that persist into adulthood. Pediatric neurology evolved as the volume and complexity of data became too much for general pediatricians or adult neurologists and has continued to evolve into so many subspecialties, such as epilepsy, neuromuscular disease, and malformations, that general pediatric neurologists no longer have in-depth expertise in all areas. Subspecialty expertise is provided through fellowship programs, many of which include research training. Infectious context, genetic background, and medical practice vary worldwide and must be represented in a pediatric neurology textbook. Subspecialty experts helped design its general framework and contents. Special emphasis is given to development, and normal development is reviewed when needed. The course of chronic diseases into adulthood and ethical issues specific to developing nervous systems are also addressed.