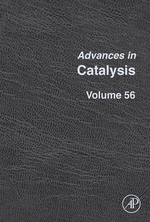 Advances in Catalysis fills the gap between the journal papers and the textbooks across the diverse areas of catalysis research. For more than 60 years Advances in Catalysis has been dedicated to recording progress in the field of catalysis and providing the scientific community with comprehensive and authoritative reviews. This series in invaluable to chemical engineers, physical chemists, biochemists, researchers and industrial chemists working in the fields of catalysis and materials chemistry.