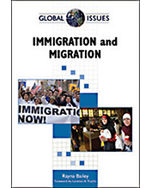 From rioting by immigrants in France to protests against illegal immigration in the United States, the topic of immigration has made headlines all over the world recently. Immigration and Migration helps put this issue in perspective. This insightful book discusses the many reasons people choose to immigrate or migrate to other countries, such as to escape poverty and seek employment opportunities, as refugees from war, or for political asylum. The financial, cultural, and social contributions made by immigrants and migrants to their adopted countries are also discussed, as well as the problems associated with immigration, including difficulties assimilating immigrants into existing communities, racial biases, and entering countries illegally.