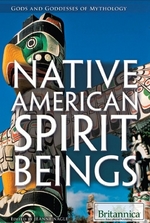 Native American spirituality is as rich and varied as the cultures wherein it is practiced. Unlike the ancient Greeks and Romans, who worshipped divine gods and goddesses, the indigenous people of North America revere a variety of non-deity spirit beings, which are entities with mystical powers. The crux of Native American spirituality and detailed entries regarding some of the most intriguing spirit beings are discussed in this book. Detailed material on Native American religious traditions, beliefs by culture area, and a complete chapter on nature worship are included in this informative package.