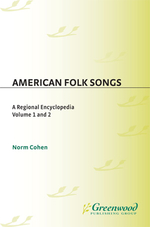 This state-by-state collection of folksongs describes the history, society, culture, and events characteristic of all fifty states. Unlike all other state folksong collections, this one does not focus on songs collected in the particular states, but rather on songs concerning the life and times of the people of that state. The topics range from the major historical events, such as the Boston Tea Party, the attack on Fort Sumter, and the California Gold Rush, to regionally important events such as disasters and murders, labor problems, occupational songs, ethnic conflicts. Some of the songs will be widely recognized, such as Casey Jones, Marching Through Georgia, or Sweet Betsy from Pike. Others, less familiar, have not been reprinted since their original publication, but deserve to be studied because of what they tell about the people of these United States, their loves, labors, and losses, and their responses to events. The collection is organized by regions, starting with New England and ending with the states bordering the Pacific Ocean, and by states within each region. For each state there are from four to fifteen songs presented, with an average of 10 songs per state. For each song, a full text is reprented, followed by discussion of the song in its historical context.

"From "Yankee Doodle" to "Roll On Columbia, Roll On," American folk songs capture particular points in our nation’s history. From battles and political contests to murders and natural disasters, they reflect people and events that captured the public interest and imagination. Though frequently unpolished and derivative, such creative works nonetheless reflect contemporary attitudes and opinions. Norm Cohen, a long-time scholar of folk music, leads this geographical tour of ballads and folk songs in the United States. State sections begin with a brief overview of the region’s settlement. Each entry includes the full text of the song with background notes on the events or issues reflected in the lyrics. Selected songs are illustrated with reproductions of the original broadside publications. The coverage features war songs as well as patriotic or nostalgic tributes to states and regions. From the opening of the frontier to mill strikes, economic developments are reflected in songs like "The Erie Canal" and "the Marion Massacre." The chronological range extends from the Revolution through the 1930s. Floods, train wrecks and bank robbers are among the popular themes of songs memorializing crimes and tragedies. Some selections, like "The Old Folks at Home," "The Yellow Rose of Texas" or "Tom Dooley," are widely known, but most are much more obscure. Most are written in English, but a little more than 5 percent feature songs in Spanish, Hawaiian or the languages of other ethnic groups. Supplemental materials include a list of songs excluded, a general bibliography and a title index of all entries. Most of the latter are excluded from the general index. The result is a comprehensive survey of traditional American folk music that will be of interest in school, public and academic libraries."--Lawrence Looks at Books, April 2009