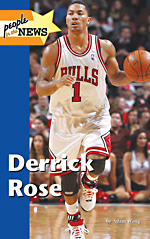 People in the News offers young readers a deeper look into the lives of today's newsmakers. Each title in the series focuses on one notable contemporary figure, covers their contributions and achievements or notorious deeds, looks at the influences that have shaped them, and describes the impact they have had in their fields of endeavor and on other people's lives.

Basketball phenomenon Derrick Rose grew up in Chicago, Illinois, learning the game from his three older brothers. By the time he entered high school, Rose was already on the radar of collegiate coaches. This title takes readers from his childhood on Chicago's South Side, through his high school career and college year with the University of Memphis Tigers, to his being selected first overall by the Chicago Bulls in the 2008 NBA Draft.