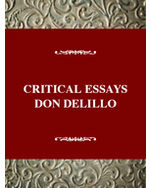 Critical essays and reviews focus on the works of the popular contemporary novelist Don DeLillo, whose books, including Ratner's Star, White Noise, Libra and Mao II, are postmodernist portrayals of empty mass culture and politics in America.