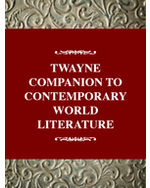 The Twayne Companion to Contemporary World Literature is a reference anthology of literary criticism on world literature, with a focus on the last quarter century. Twayne Publishers has collaborated with the second oldest literary journal in the United States, World Literature Today.

This title provides a synthesis of some of the world's best writers and is of relevance to researchers in fields beyond literature, including politics, society, culture, gender studies, religion, and current events.

Essay titles by major writers include: Octavio Paz's "The Liberal Tradition"; Elie Wiesel's "A Vision of the Apocalypse"; Maria Vargas Llosa's "Social Commitment and the Latin American Writer"; and J. Hillis Miller's "World Literature in the Age of Telecommunications."

"The newest edition to the Twayne Companion to Literature series features 300 essays and 150 book reviews, mostly written since 1977, that are reprinted from the literary quarterly World Literature Today (WLT). The essays, ranging in length from 2 to 14 pages and sometimes accompanied by a black-and-white photograph, are arranged geographically by broad locale and then by individual country, where applicable...Reference works covering world literature are scarce; the most similar thing in scope sitting on reference shelves is the five-volume Encyclopedia of World Literature in the 20th Century (St. James, 1999), which is considerably more expensive but is a more traditional reference source. In the Encyclopedia one can get an overview of the life and work of an author, for example, while in the Twayne Companion one might find an essay that analyzes his or her last novel and its relationship to nature. The sets complement one another, but the sophisticated nature of Twayne probably makes it best suited for academic libraries." -- Booklist (October 2003)

"This set hopes to underscore the primary goal of comparative literature studies: placing literature in a broad cultural and historical as well as an aesthetic context. In a far-ranging introductory essay, the editor argues that it is impossible to appreciate world literature without paying close attention both to political issues like colonization, race, and ethnicity as well as the seemingly more objective concerns of aesthetic analysis. These volumes offer a generous sampling of exemplary literary criticism about writers from all over the world. They will be more useful in the circulating than the reference collection."--ARBA (2004)

"Twayne Literary Companions -concise, readable one-volume guides to literary works and authors - have been a mainstay of circulating college library collections for 50 years. The publisher has recently expanded to literary reference works with its Twayne Companion to Literature series - critical anthologies on themes and authors produced via partnership with distinguished literary journals. The latest in the series, published in conjunction with World Literature Today provides a microhistory of contemporary writing by some of the world¿s finest critics and writers (J. Hillis Miller, Max Frisch, and Octavio Paz are among the contributors)...The most likely user of this work is a student in a college or graduate literature class." -- Library Journal