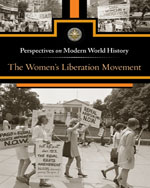 This new addition to the Perspectives on Modern World History series explores the historical and cultural events leading up to and following the Women's Liberation Movement of the 1970s. The text addresses several issues surrounding the movement, such as the debate surrounding the Equal Rights Amendment and the impact of the "Elimination of All Forms of Discrimination of Women" treaty adopted by the United Nations General Assembly in 1979. Personal narratives from people impacted by the Women's Movement, including an interview with a member of NOW (the National Organization for Women) and a writer recalling what the liberation movement meant to her in the 1970s, are featured.