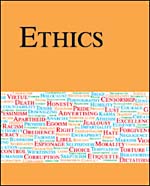 Ethics, Revised Edition is the first revision of Salem Press's highly praised Ethics, which was published in 1994. The revised edition adds more than 200 completely new essays to the original 817 essays and updates and expands many of those original essays. The main thrust of this revised edition is on applied ethics, with a particular emphasis on current issues. This set expands the earlier work's coverage by addressing the many ethics issues that have come to prominence over the past decade. These include such religious topics as church-state separation, faith healers, Islamic ethics, the jihad concept, religion and violence, the Roman Catholic priests sexual abuse scandal, Scientology, and televangelists. The set also gives particular attention to business and labor ethics, with new articles on such topics as advertising, computer misuse, corporate compensation, downsizing and outsourcing, and the tobacco industry. New topics on political and economic issues include Congress, distributive justice, famine as an instrument of oppression, care of the homeless, lobbying, lotteries, minimum wage laws, and the fairness of taxes. Personal and social ethics issues are the subject of a similar number of new essays, which include topics ranging from cell-phone etiquette and workplace dress codes to premarital sex and professional resumes.