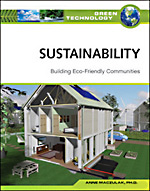 The early 21st century may someday be looked upon as a pivotal point in the Earth's history. At its most dramatic, this era might one day be thought of as the beginning of the end. The present decade marks a milestone in which the majority of people in industrialized nations and a large portion of people in the developing world are now feeling the effects of too many humans, too much waste, and the disappearance of plant and animal species faster than at any other time in history.

Sustainability describes the innovations that will likely play a role in the near future for creating a critical mass in the environment's favor. Opening with a chapter describing the ecosystem of humans, animals, plants, and other life, this new full-color guide provides an overview of ecology and the philosophy of living for the environment rather than taking from it. It goes on to explore some places in the world that have started making changes in order to live in a sustainable way as well as some new materials that conserve natural resources.