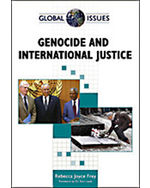 The term "genocide" was coined in 1944, but it has been practiced for centuries. The intent of one people to deliberately wipe out another can be traced back to the ancient world, and it continues today despite efforts from the United Nations and international treaties such as the Convention on the Prevention and Punishment of the Crime of Genocide.

Beginning with an introduction that defines the term "genocide," Genocide and International Justice discusses the field of comparative genocide studies and outlines the stages of the Holocaust, which has become the template for evaluating and defining other genocides. The introduction is followed by detailed case studies examining ethnocide among Native Americans in the precolonial and early colonial period, the decimation of the Native American population during the colonial period, and the massacres and forced migrations of Native Americans in the 19th century. This accessible new book details various acts of genocide by the Mongols in Central Asia and the Armenian genocide, as well as the genocides in Cambodia, Rwanda, and Darfur. Efforts by the international community to prevent genocide and to prosecute those who commit acts of genocide are also discussed.