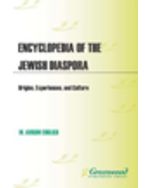 From the Roman occupation of Judea circa 135 A.D. to the founding of Israel, Jewish people were without a sovereign homeland. But far from eradicating Judaism, as the Emperor Hadrian desired, the Judean conquest expanded its reach, as Jewish refugees, pilgrims, and slaves scattered throughout the world, accelerating a Diaspora that had begun six to eight centuries earlier.

Encyclopedia of the Jewish Diaspora: Origins, Experiences, and Culture is the definitive resource on one of world history's most curious phenomenons, encompassing the communities, cultures, ethnicities, and experiences created by the Diaspora in every region of the world where Jews live or Jewish ancestry exists.

The encyclopedia is organized in three volumes. The first includes 100 essays on the Jewish Diaspora experience, with coverage ranging from ethnography and demography to philosophy, history, music, and business. The second and third volumes feature hundreds of articles and essays on Diaspora regions, countries, cities, and other locations. With an editorial board of renowned Jewish scholars, and with an extraordinarily accomplished team of contributors, Encyclopedia of the Jewish Diaspora captures the full scope of its subject like no other reference work before it.

Front Cover.
Half Title Page.
Title Page.
Copyright Page.
Contents in Brief.
Contents.
Editorial Board and Staff.
Contributors.
Preface.
Maps.
Introduction: The Need and Usefulness of Diaspora Studies.
1: The Concept of Diaspora in Biblical Literature.
2: The Concept of Diaspora in Talmudic Thought.
3: Diaspora in the Hellenistic Period.
4: Symbols of the Diaspora.
5: Liturgy in the Diaspora.
6: The Concept of Exile and Diaspora in Sephardi Thought.
7: Lurianic Kabbalah and the Idea of the Diaspora.
8: Communication in the Premodern Jewish Diaspora.
9: The Concept of Diaspora and Exile in German-Jewish Literature and Art.
10: The Concept of Sephardi and the Ashkenazi in German-Jewish and German Anti-Semitic Thought.
11: The Concept of Diaspora in the Thought of Rabbi Joseph B. Soloveitchik.
12: Jewry as an Archetypical Diaspora.
13: Jewish Self-Hatred.
14: Diaspora, Exile, and Jewish Identity.
15: Jews and Judaism in Ancient World Literature.
16: History of Jews as a Minority.
17: The Lost Tribes of Israel.
18: The Samaritan Diaspora.
19: History of the Karaite Diaspora.
20: History of Jewish Persecution and Expulsion.
21: Varieties of Anti-Semitism.
22: Literary Anti-Semitism.
23: Western Democracies and the Holocaust.
24: Euro-Arab Anti-Semitism.
25: The New Anti-Semitism.
26: The Dissemination of Early Christianity beyond the Jewish Diaspora.
27: Jewish Diaspora and the Spreading of Christianity.
28: Jewish Influence on the Formation of the Christian Scriptures.
29: History of Judeo-Christian Communities in the Jewish Diaspora.
30: Islamization and Jews in the Medieval Middle East.
31: Christian-Jewish Dialogue: 18th Century.
32: Contemporary Judeo-Christian Communities in the Jewish Diaspora.
33: Jewish-Islamic Mutual Influences.
34: The Widespread Phenomena of Marranism and Hidden Jews.
35: Brazilian Marranism.
36: Characteristics of Jewish Languages.
37: Varieties of Diaspora Languages.
38: Judeo-Spanish in the Turkish Social Context.
39: Two-Tiered Relexification in Yiddish: Jews, Sorbs, Khazars, and the Kiev-Polessian Dialect.
40: A Perspective on Judeo-Ibero-Romance, Yiddish, and Rotwelsch.
41: The Yiddish-German Irony.
42: Yiddish as a Diaspora Language and Its Future.
43: The Integration of Yiddish into English.
44: Diaspora Influences on Modern Hebrew (“Israeli”).
45: Music and Culture of the Diaspora Overview of Diaspora Jewish Music.
46: Liturgical Music of Sephardi Jews.
47: Liturgy and Music of Syrian Jews.
48: Humor and Satire in Judeo-Spanish Song.
49: Music and the Reconstruction of Iberian Crypto-Jewish Identity.
50: Contemporary Jewish Music in America.
51: Rescue and Virtual Preservation of Diaspora Cultural Heritage by the Center for Jewish Art.
52: Jewish Contributions to the Arts.
53: The Jewish Diaspora and the Role of Women.
54: Sephardi Women, Marriage, and Family: 16th-17th Centuries.
55: Jewish Women in Central Europe: 19th-20th Centuries.
56: Women, Family, and Identity in Imperial Germany (1871–1918).
57: Jewish Women in Yemen.
58: Women and Egalitarianism in American Judaism.
59: Genetics, Medicine, and Genealogy Jewish Genetic Diseases.
60: Genetic Diseases and the Diaspora.
61: Evolution of Jewish Genealogic Studies.
62: Jews, Diaspora, and Medicine.
63: Freud, Judaism, and the Emergence of Psychoanalysis.
64: Jews under Muslim Rule.
65: History of the Religious Leadership of Oriental Jewry.
66: Insights into Sephardic Intellectual History.
67: Jewish Enlightenment and Its Impact on the Diaspora.
68: Beginnings of Hasidism in Eastern Europe.
69: Jewish Immigration to Pre-State and Modern Israel.
70: Diaspora Anti-Zionism.
71: Jewish Diaspora Engagement with Israel.
72: Education in Israel about the Diaspora.
73: A Chronology of Jewish Travelers and Explorers.
74: Migration Patterns of Iraqi Jews.
75: Westward Migration Routes of Sephardi Jews.
76: Population Transfer of the Jews of Thessaloniki.
77: Migration Routes of Rhodian Jews of the Ottoman Empire and the Mediterranean Basin.
78: Migration Routes of Egyptian Jews.
79: Why the Majority of the Jews of Iraq Emigrated to Israel in Operation Ezra and Nehemya, as Viewed by Jewish Memoirs.
80: Modern Jewish Refugees from Arab Countries.
81: Contemporary Migration Patterns of Russian Jews to Germany.
82: The Demography of Modern Diaspora Jewry.
83: Self-Revitalization of Diaspora Life.
84: Jewish Values and Diaspora Philanthropy.
85: Contemporary Responses to Intermarriage.
86: A Rabbi's Reflections on the Modern Rabbinate and the Jewish Community.
87: Insight into the Workings of a Diaspora Beth Din.
88: Contemporary Conversion Patterns into Orthodox Judaism.
89: Jewish Day School Education in French-Speaking Europe.
90: The International Network of Religious Zionist Kollels.
91: The Habad Movement, Its Organizations, and Its Influence in the Diaspora.
Glossary of Diaspora Concepts, Themes, Names, Places, People, and Organizations.
About the Editor.