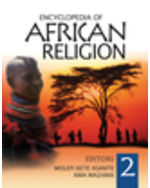 African religion has increasingly captured the attention of social scientists, philosophers, and humanists as new ethical and moral issues have expanded the desire for a science of cultural knowledge capable of advancing a multidimensional portrait of humanity's responses to environment, relationships, and uncertainty. Involving numerous theoretical and methodological approaches to the emergence of ethical, moral, and ritual ideas, the field of African religion has tended toward a unification of thought which could best be seen through comparative lenses. Exposition of the activities and concepts of the divine, the nature of humanity, the end of life, the conquest of fear, and the quest for the attainment of harmony with nature and other humans are at the center of the process of the scholarly study of African religion. Note that the audiences for this volume consist of undergraduates, graduate students, and the informed lay public in the United States and other parts of the world. The volume is conceived as a work that will be in every major library and many museums in the world. At the present time, there is no comparable encyclopedia, and ours should be well received in fields such as religion, Africana Studies, religion, sociology, and philosophy.