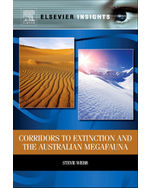 Corridors to Extinction and the Australian Megafauna, 1st Edition

Extinctions have always occurred and always will, so what is so surprising about the megafauna extinctions? They were caused by humans and were the first of many extinctions that eventually led to the extinction of the Moa, Steller's Sea Cow, the Dodo, Great Auk and countless other species great and small, all attributed to human agency. Therefore, the megafauna were humans' first great impact on the planet. There is now an increasing realization that the 'blitzkrieg' view of these extinctions may have been wrong. A growing body of evidence and long-term field work is beginning to show that at least Australia's megafauna did not succumb to human agency, not because humans probably did not hunt the odd animal but because the an infinitely more logical reason lies in the climatic conditions of the Quaternary Ice Ages and the affect they had on continental geography, environment, climate and, most importantly, the biogeography of the megafauna. This book presents the evidence of this theory, demonstrating the biogeographic approach to Australia's megafauna extinction. Written clearly to benefit a diverse level of readers, from those with a passing interest to professionals in the field.