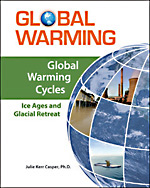 Earth has always exhibited patterns of heating up and cooling down. At some points in time, many areas of Earth were shrouded in blankets of ice, with ice caps and glaciers dominating the landscape. Certain areas on Earth have been covered with prominent glaciers multiple times in the past for millions of years. Since the last ice age, which ended just over 10,000 years ago, the Earth's climate has been relatively stable, with just a few fluctuations; at least until the beginning of the Industrial Revolution in the 1700s, when the climate began to increase in temperature.

Global Warming Cycles focuses on the mechanisms that caused past climate changes, putting the Earth repeatedly into and out of ice ages. It compares natural cycles with today's rapid global warming, caused principally by the behavior of humans. This timely new volume presents the many physical factors that shape the Earth's climate, examining the ones that are out of our control as well as the ones that humans have a direct impact on. It also looks at how scientists use landform clues from the past to assess global warming and how they apply that knowledge to the future to help prepare current and future society for what is to come.