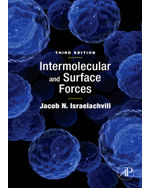 This reference describes the role of various intermolecular and interparticle forces in determining the properties of simple systems such as gases, liquids and solids, with a special focus on more complex colloidal, polymeric and biological systems. The book provides a thorough foundation in theories and concepts of intermolecular forces, allowing researchers and students to recognize which forces are important in any particular system, as well as how to control these forces. This third edition is expanded into three sections and contains five new chapters over the previous edition.