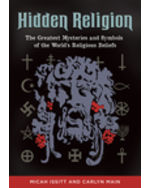 Hidden Religion: The Greatest Mysteries and Symbols of the World's Religious Beliefs not only explores the history and origins of widely recognizable symbols, like the Christian cross and the Star of David, but also introduces readers to more obscure symbols from religious traditions around the world-even defunct ones like those of the ancient Aztec and Mayan societies. In addition, the book discusses the "religious secrets" found in the major religions, including secret societies of Christianity, Judaism, Islam, and Buddhism. Containing more than 170 entries, the encyclopedia is organized by religious category, such as Abrahamic, East Asian, and African Diasporic religions, then alphabetically within each category. Each entry is prefaced with a short introduction that explains where and when the religious tradition originated and describes the religion today. This information is followed by an analysis of the historical development and use of symbols along with an explanation of connections between symbols used by different religions, such as shared astrological symbolism in the form of moon, sun, or star motifs.