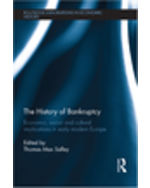 The History of Bankruptcy, 1st Edition

Always a natural companion to capitalism, bankruptcy has become much more prevalent in the public consciousness since the global financial crisis. This volume, from an international set of scholars, focuses on bankruptcy in early modern Europe, when its frequency made it not only an economic problem but the great personal and social tragedy it has become.

Front Cover.
Other Frontmatter.
Title Page.
Copyright Page.
Contents.
Contributors.
Introduction: A History of Bankruptcy and Bankruptcy in History.
1: Social Contexts.
2: Merchants' Bankruptcies, Economic Development and Social Relations in German Cities during the Long 16th Century.
3: Debt and Default in 18th-Century Champagne.
4: Credit, Trust and Risk: Shopkeepers' Bankruptcies in 18th-Century Paris.
5: Financial Networks, Migration and the Transformation of the Merchant Elite in 18th-Century Stockholm.
6: Business Practices.
7: Bankruptcy in the Kingdom of Naples: The Case of Public Banks (17th to 18th Centuries).
8: Learning from Others' Failures: The Rise of the Monte di Pietà in Early Modern Bologna.
9: Bankruptcy and the Bank: The Case of the “Kaiserlich Königliche Wiener Octroyierte Commercial, Leih- und Wechselbank” of Vienna in the 18th Century.
10: Boom and Crisis in Financing the British Transatlantic Trade.
11: Institutional Developments.
12: The Insolvent Zuchthaus as Cameralist Dystopia.
13: Bankruptcy in Early Modern German Territories.
14: Bankruptcy, Insolvency and Debt Collection among Merchants in Antwerp (c.1490 to c.1540).
15: The Reception of the Actio Pauliana in Scots Law.
16: Bankruptcy, Fresh Start and Debt Renegotiation in England and France (17th to 18th Century).
Bibliography.
Index.