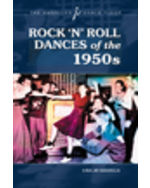 Considered a quiet, conformist decade, the 1950s were, in reality, a time of simmering tensions, many of which would erupt in the free-wheeling 1960s. The rock 'n' roll dances that emerged during the mid- to late-1950s both reflected and expressed these tensions, whether intergenerational, interracial, or merely indicative of a new era about to be born.