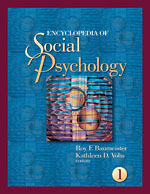 Not long ago, social psychology was a small field consisting of creative, energetic researchers bent on trying to study a few vexing problems in normal adult human behavior with rigorous scientific methods. In a few short decades, the field has blossomed into a major intellectual force, with thousands of researchers worldwide exploring a stunningly diverse set of fascinating phenomena with an impressive arsenal of research methods and ever more carefully honed theories.

Encyclopedia of Social Psychology is the first resource to present state-of-the art research and ready-to-use facts from this fascinating field. These three volumes include more than 600 entries chosen by a diverse team of experts to comprise an exhaustive list of the most important concepts. This Encyclopedia is written for students who may be encountering concepts such as social loafing, deindividuation, base rate fallacy, ego depletion, and self-handicapping for the first time and want a simple, clear, jargon-free explanation of what they mean.

"Boasting an extensive list of contributors and an impressive amount of detail throughout, this is an excellent tool for undergraduates, practitioners, graduates, and researchers. Essential for academic libraries. [Available electronically through Sage eReference as well as through the Gale Virtual Reference Library.]" --Library Journal, February 15, 2008