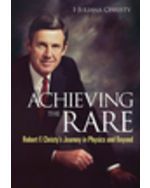 Achieving The Rare: Robert F Christy's Journey In Physics And Beyond, 1st Edition

Robert F Christy was a legendary physicist, one of the key players in some of the most dramatic events of the 20th century. He was a student of Oppenheimer, who called him one of the best in the world. He was a crucial member of Fermis team when they first unleashed the unheard-of energies of nuclear power, creating the worlds first nuclear reactor on December 2, 1942. On the Manhattan Project he was the key physicist in the successful test of the worlds first atomic bomb, the Christy Gadget, at Alamogordo on July 16, 1945. Almost immediately he turned his talents to promoting the peaceful uses of atomic energy. He successfully opposed atmospheric testing of atomic bombs and fought nuclear proliferation, a campaign that eventually led to the SALT talks with the Soviet Union. His favorite subject was astrophysics where he made fundamental contributions to the understanding of Cepheids, variable stars that are crucial distance indicators in the universe.Robert was equally fascinating as a man. In his mid-50s he became irresistably attracted to an astrophysicist, but they were a continent and a generation apart. Near his 60s they started a happy and fulfilling life together. He remained vigorous both mentally and physically into his 90s: he was still galloping his horse at age 93.Roberts story is one of overcoming obstacles, of hope, and of fulfillment