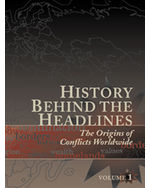 History Behind the Headlines: The Origins of Conflicts Worldwide

Almost every day, newspapers describe major conflicts -- some have recently erupted, many span decades. Almost all have deep-rooted, historic causes, but these causes are not always fully explained in today's newspaper and television accounts. History Behind the Headlines, an ongoing print series, is intended to fill this gap and explain the historical background of today's major international conflicts. Volume 5 of History Behind the Headlines is a special volume devoted entirely to topics of terrorism.

Each volume covers approximately 25 to 30 conflicts such as border, civil, and guerrilla wars, embargoes, and religious strife. History Behind the Headlines covers such topics as economic sanctions, impeachment in the Philippines, a free press in Russia, and elections in Serbia.

History Behind the Headlines Series

Today's newspapers are filled with reports of conflicts between nations. Some conflicts have recently erupted; many have been going on for years. But most of them have deep-rooted, historical causes that are not explained in the media. That's what makes History Behind The Headlines big news for librarians, students, teachers, and other researchers, who will consult it over and over again. For important background information on long-term ethnic, religious, political, territorial, and economic conflicts between nations today, there isn't a more targeted ongoing print series. Volume 5 of History Behind The Headlines is a special volume devoted entirely to topics of terrorism. Each biannual volume includes approximately 30 entries arranged alphabetically by either the major country involved or the subject of the conflict. This title offers a unique and in-depth analysis, tracing significant international conflicts back to their earliest stages.