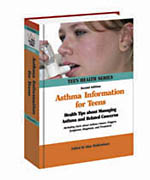 According the Centers for Disease Control and Prevention (CDC), nine million U.S. children under age 18 have been diagnosed with asthma, and more than four million have had an asthma attack in the past 12 months. Asthma accounts for an estimated 14 million lost days of school annually.

Although some people may believe that asthma is not serious, that it is just an inconvenience, or that the asthma sufferer is simply lazy, these are misconceptions. Asthma is a chronic, inflammatory lung disease that cannot be cured or prevented. Nearly a half million Americans are hospitalized annually because of asthma, and it ranks third as a cause of hospitalization among people under the age of 15. The death rate associated with asthma is low, but asthma deaths have increased significantly in recent decades and approximately 5,000 Americans die every year as a result of asthma.

Asthma Information For Teens provides basic facts for teens who have recently received a diagnosis of asthma as well as more in-depth information for teens who have had experience dealing with asthma since early childhood. It includes information about the genetic and environmental factors that may contribute to the development of asthma, common asthma "triggers" (substances like pollen, dust mites, mold, tobacco smoke, cockroaches, animal dander, and some chemicals that cause attacks in people with asthma), and the medications and lifestyle adjustments used in managing asthma and controlling asthma flares. A section on current asthma-related research is also included along with a directory of resources and suggestions for teens who would like to read more about asthma.

Front Cover.
Half Title Page.
Title Page.
Copyright Page.
Table of Contents.
Preface.
1: Asthma Facts.
2: The Lungs and Respiratory System.
3: What is Asthma?.
4: Asthma Statistics.
5: Asthma in Children and Young Adults.
6: Asthma and Diverse Communities.
7: Risk Factors for Developing Asthma.
8: Types of Asthma.
9: Exercise-Induced Asthma.
10: Nocturnal Asthma.
11: Occupational Asthma.
12: Diagnosing and Managing Asthma.
13: How to Tell if you have Asthma.
14: How your Doctor Diagnoses Asthma.
15: What does a Pulmonologist do?.
16: Should i see an Allergist?.
17: Allergy Testing.
18: What is a Peak Flow Meter?.
19: Tips for Controlling your Asthma.
20: Asthma Attacks.
21: Medications used to Treat Asthma Symptoms.
22: How is Asthma Treated?.
23: Understanding the Different Types of Asthma Medications.
24: What you Need to know about Anti-IgE Treatment.
25: What you Need to know about Bronchodilators.
26: What you Need to know about Corticosteroids.
27: What you Need to know about Cromolyn Sodium.
28: What you Need to know about Montelukast and other Leukotriene Modifiers.
29: What you Need to know about Theophylline.
30: Inhaled Steroids.
31: Do Inhaled Steroids Stunt your Growth?.
32: Dry Powder Inhalers.
33: How to use Asthma Medication Devices.
34: Alternative Therapies for Managing Asthma.
35: Other Medical Conditions and Asthma.
36: Allergies and Asthma: What’s the Connection?.
37: Chronic Obstructive Pulmonary Disease (COPD).
38: Colds and Influenza.
39: Coughing: A Defense Mechanism and a Symptom.
40: Gastroesophageal Reflux Disease (GERD) and Asthma.
41: Osteoporosis: Risks for People with Asthma.
42: Rhinitis and Sinusitis.
43: Lifestyle Issues in Asthma Management.
44: Living with Asthma.
45: Recognizing Asthma Symptoms and Triggers.
46: Air Pollution and Outdoor Triggers.
47: Controlling Asthma Triggers in the Home.
48: What People with Asthma Should know about Pets.
49: Using an Asthma Action Plan.
50: Calming your Cough.
51: The September Epidemic: The Back-To-School Season and Asthma.
52: Managing Asthma in the School Environment.
53: Good Health Habits and Asthma.
54: Exercise and Asthma.
55: Teen Smoking and Asthma.
56: Traveling with Asthma.
57: Why Nonadherence to Treatment Plans is a Problem.
58: Dealing with Asthma Emergencies.
59: Asthma Research.
60: The National Asthma Control Program.
61: Ozone, air Quality, and Asthma.
62: Hormone Fluctuations and Asthma.
63: New Treatments for Asthma.
64: Medicines that can make Asthma Worse.
65: If you Need Additional Help and Information.
66: Asthma Organizations.
67: If you would Like to Read more about Asthma.
Index.