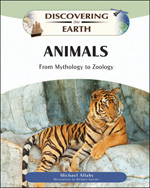 ANIMALS begins its story in ancient Greece, at a time when thinkers were trying to construct a coherent image of the universe. They needed to make sense of the world around them and the earliest theories explaining the origins of animals were drawn from the experiences of hunters. Greek philosophers eventually came to realize that careful observation of the animal kingdom is the only basis for a true understanding of the natural world. With this realization in mind, they laid the foundation of what would become a scientific approach to phenomena. Animals provides brief glimpses of some of the events that have led to the present scientific understanding of animals, as well as short accounts of the lives of a few of the remarkable individuals who have contributed to that story. Describing a few of the changing ideas that have shaped the way people see the world of animals, this new, full-color book examines some of the research that has revealed their physiology and explained their evolution and behavior. It explores the discovery of the gene, the physical structure of DNA, and how the genetic constitution of species came to be used to determine their relationships. Animals contains a glossary defining technical terms as well as a list of books and Web sites for further information.