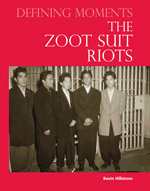 The Zoot Suit Riots provides a comprehensive overview of the notorious Zoot Suit Riots, an explosive race riot that rocked Los Angeles, California, at the height of the Second World War. The book surveys the political events, social trends, and racial attitudes that contributed to that week-long orgy of violence by white servicemen and civilians against young Mexican-American "zoot suiters," including the Depression-era struggle for jobs and the 1942 Sleepy Lagoon murder. It also provides extensive coverage of the riots themselves, including the central role that state media outlets played in fanning the violence. But the volume also sets the Zoot Suit Riots within the context of the wider Latino-American experience. To that end, the volume also details the history of Hispanics in America from the colonial era to the present, devoting particular attention to high-interest topics like illegal immigration, "English-only" initiatives, heritage preservation, and the Latino community's growing economic and political power in twenty-first century America.