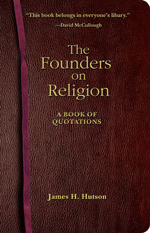 The Founders on Religion, 1st Edition

The book calls to the witness stand all the usual suspects: George Washington, Thomas Jefferson, James Madison, Benjamin Franklin, and John Adams, as well as many lesser known but highly influential luminaries, among them Continental Congress President Elias Boudinot, Declaration of Independence signer Charles Carroll, and John Dickinson, "the Pennsylvania Farmer." It also gives voice to two founding "mothers," Abigail Adams and Martha Washington. The founders quoted here ranged from the piously evangelical to the steadfastly unorthodox. Some were such avid students of theology that they were treated as equals by the leading ministers of their day. Others vacillated in their conviction. James Madison's religious beliefs appeared to weaken as he grew older. Thomas Jefferson, on the other hand, seemed to warm to religion late in life. This compilation lays out the founders' positions on more than seventy topics, including the afterlife, the death of loved ones, divorce, the raising of children, the reliability of biblical texts, and the nature of Islam and Judaism. Readers of all religious persuasions, or of none, will find this book engrossing.