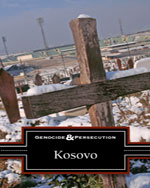 This title explores genocide and persecution in Kosovo, including the historical/cultural background of long-running disputes between Kosovo and Serbia and other territories in the former Yugoslavia, particularly focusing on the 1999 war in Kosovo and the mass killings of Kosovo Albanians by Serbs, issues surrounding the 1999 war in Kosovo and the aftermath, including whether the atrocities committed by Serbs against Kosovo Albanians rose to the level of genocide; whether NATO was right to intervene by bombing Serbia; and whether the post-war trial of Slobodan Milosevic was a success or an embarrassing spectacle, personal narratives from people touched by the events in Kosovo, including the story of a 10-year-old Albanian boy who lost his family to Serb violence, and a Roma woman who experienced persecution at the hands of Kosovo Albanians.