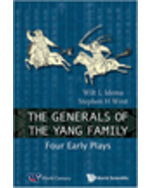 This book offers a complete translation of four early plays of the Yang Family Generals. The story of the Yang Family Generals, particularly its female generals, was a perennial favorite on the Chinese stage in the 19th and 20th centuries. In detailing the role of this military family in the Song-Khitan wars of the late 10th and early 11th centuries, these four plays are all in the form of zaju, a type of play that originated in the 13th century. These plays are from the 15th and 16th centuries and allow a glimpse into earlier renditions of the Yang Family saga, which is a decidedly more male-centered tradition than that performed in the Qing dynasty.This volume offers the only complete English-language translation of these early plays. These plays allow access to the earliest phase in the development of the Yang Family saga. The plays provide information on the staging of large battle scenes on the stage and have considerable literary and cultural value.

Front Cover.
Half Title Page.
Title Page.
Copyright Page.
Contents.
Introduction.
Table of Dynasties.
Conventions.
1: The Eighth Great Prince Opens a Proclamation and Saves a Loyal Vassal Saves a Loyal Vassal.
2: At Bright Sky Pagoda Meng Liang Steals the Bones.
3: Xie Jinwu Underhandedly Tears Down Clear Breeze Mansion.
4: Yang Six Lines Up His Troops to Defeat the Heavenly Array.
Appendix 1: A Summary of Expanded Account of the Loyalty and Bravery Over Successive Generations of the Yang Family.
Appendix 2: A Summary of the Relevant Chapters from An Account of [The Prince] of Southern Song and a Summary of An Account of the Northern Song.
Appendix 3: The Ming Play The Three Passes.
Appendix 4: The Theft of the Bones: Three Versions.
Bibliography.
Index.